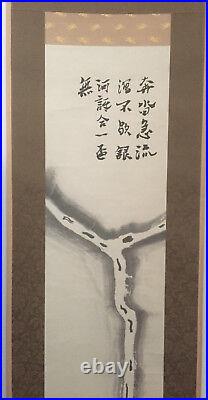 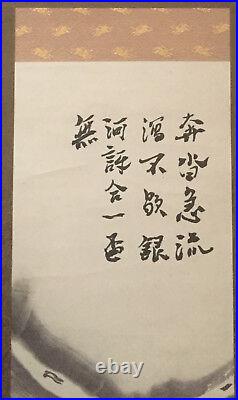 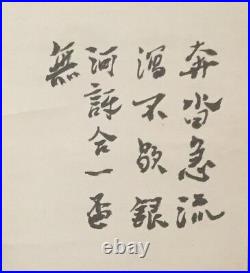 I believe that t. He artist’s name is based on a signature and seal and also the style. Hand Painted Hanging Scroll TITLE : Waterfall Signature (Seal). Was a Japanese literati painter. He originally trained as a Confucian scholar, but spent the second half of his life as a literati and artist. The book Mountains of the Heart contains many of his most famous paintings. Height: 192cm Width: 31cm Origin: JAPAN Material: Ink and Colour on Silk and Paper Roller ends: Hard white material Condition: Normal (Very Little Damage & Stain commensurate with age and use). [1] Kinga’s calligraphy and painting would remain an important influence on Bosai throughout his life. At the age of twenty-two, in 1774, Bosai opened his own school of Confucian studies. Bosai was forced to close the school in 1797 when a repressive shogunal policy placed restrictions on Confucian teachings. Bosai’s life as an independent-albeit impoverished-scholar began at this time. He not only wrote commentaries on Confucian texts but published essays on such esoterica as the food production and eating habits of the ancient Chinese. To earn a living, he made calligraphic works and wrote colophons on paintings by such artists as Ike Taiga cat. 157-159, Sakai Hoitsu cat. 134, and Suzuki Kiitsu cat. Bosai was invited by Hoitsu to write the preface to the book of woodcut reproductions of paintings by Ogata Korin that was published in 1815 to commemorate the centennial of Korin’s death. [2] The following year he designed a woodblock-printed book of his own landscapes, Kyochuzan (Mountain in My Heart). [3] Primarily a scholar and calligrapher, Bosai is believed to have begun painting only at the age of about fifty. For the most part his paintings are imaginary landscapes, with little variation in the compositional scheme. Bosai frequently included with his signature the word “suiga, ” or “suisha, ” meaning that he painted while in a state of intoxication. The Burke Landscape with Waterfall is a rare exception in Bosai’s oeuvre. Although he signed it “Drunkenly Painted for Pleasure by Old Man Bosai Ko, ” the painting is more carefully constructed than many other works thus signed. Extensive use of ink washes and deliberately applied tints of blue and buff colors bring into question his self-proclaimed drunkenness. The painting is a much larger version of two other landscapes, now in the Gitter collection, New Orleans, that are dated by inscription to 1807. [4] Human figures are here eliminated altogether, their presence merely suggested by the solid houses. The foreground is firmly established by trees with thick foliage and by the row of houses nearby. Mottled effects of dark ink applied on the tall, craggy hills are reminiscent of the tarashikomi (poured ink) technique, a hallmark of the Rinpa style and perhaps indicative of Bosai’s association with Hoitsu and Kiitsu. This item is in the category “Antiques\Asian/Oriental Antiques\Japanese\Paintings & Scrolls”. The seller is “fabclothing123″ and is located in this country: GB. This item can be shipped worldwide.