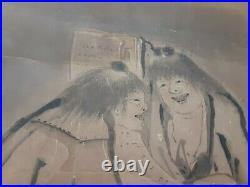 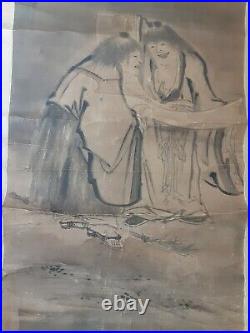 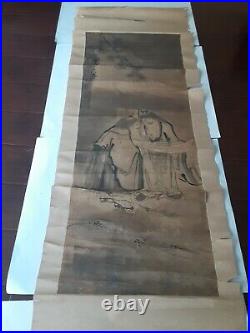 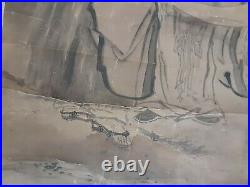 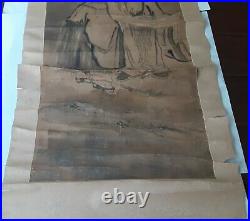 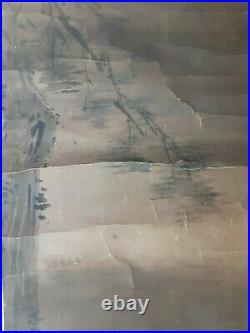 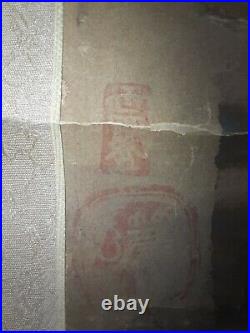 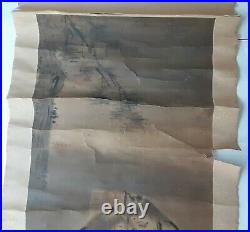 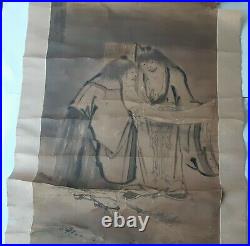 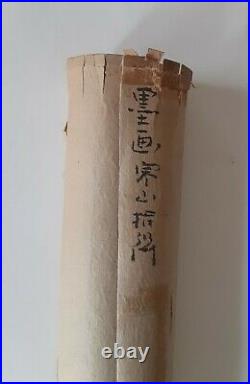 This appears to be one of the missing works by Sesshu or his pupil whom the Emperor chose as Sesshu’s incarnate heir. This painting is consistent with that of master painter of the Unkoku school. Sesshu was a Zen priest known for painting Zen Buddhist pictures, screens, and landscapes. He is one of the most prominent, if not the most famous Japanese painter of the Muromachi period. This ink on paper hanging scroll depicts the duo immortal Zen eccentrics Hanzan and Jittoku(Tang dynasty characters). The Daoist immortal characters are idolized throughout the Asian world. Together they represent the deepest inner meaning of Zen Buddhism as a whole. Sesshu studied and traveled extensively in China, studied the Chinese masters, and completed most of his known and authentic paintings while in China. This particular piece is in the Chinese form that Sesshu studied in his prime. The artwork is titled. And has two seals. Is one of Sesshu Toyo’s know works. Please note that a portion of the second seal on the scroll is partially illegible which leads to leads to the possibility that this work may in fact be one of the missing works of Sesshu or the pupil whom the Emperor chose as Sesshu’s incarnate heir. This piece is of the period and in very fragile condition considering the age. The scroll measures 62.5 inches by 24 inches. See condition: This is a very fragile piece of art!!!!!! Scroll paintings, created on silk or paper, appear in two formats: handscrolls and hanging scrolls. Handscrolls were originally used to circulate Buddhist texts, with early examples dating back to the Nara period 710-794 C. Though influenced by Chinese culture, they developed into a distinctly Japanese form. Gakan is the term used to refer to Chinese as well as non-narrative handscrolls; Japanese handscrolls are referred to as emaki-_illustrated narratives and picture scrolls. To reveal the text or series of scenes on a handscroll, the viewer unrolls it from right to left. , tales of romance, war, and adventure were among the subjects of _emaki. Murasaki Shikibu wrote one of the oldest novels in the world, the Tale of Genji (Genji Monogatari), during this period. Such works comprise several handscrolls and were stored rolled. The vertical hanging scroll, or kakemono, is left open and hung on a wall or in an alcove; when not on display it is stored rolled. Though a form of Buddhism, Zen imagery expanded into secular representations such as landscapes, and secular activities served as meditative practice. Tea drinking was a meditative practice of Chinese Chan Buddhism from which Zen derived and was incorporated into Japanese culture. Hanging scrolls were displayed within the teahouse according to season or occasion to create a harmonious aesthetic experience. This item is in the category “Antiques\Asian Antiques\Japan\Paintings & Scrolls”. The seller is “arle_gros” and is located in this country: US. This item can be shipped worldwide.